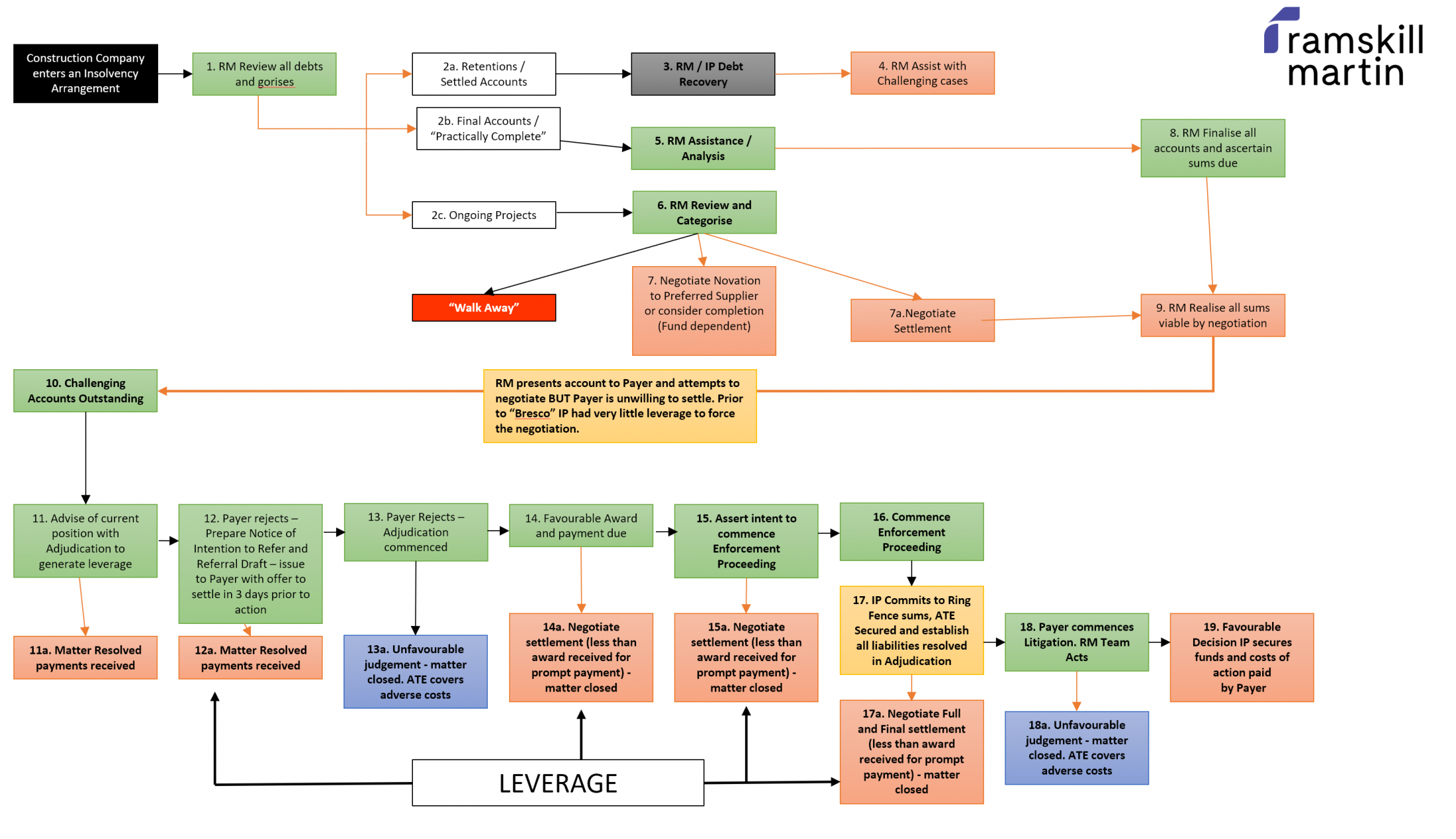 There have been a number of recent developments in Construction Law which have an important impact on the way Insolvent Companies can recover monies under Construction Contracts.

Prior to these cases, the position was that an Insolvent Construction Company could not rely on statutory (or contractual) Adjudication to resolve disputes and recover monies from unwilling payers. It was believed that Adjudication was incompatible with the rights of cross set-off in Insolvency.

In the Construction Industry all Parties to a "Construction Contract", as defined by statute, have a statutory right to Adjudicate on any dispute (there are some exceptions to this but in the main this is the position). This is a cost-effective and relatively quick method (twenty-eight days ordinarily) of resolving disputes and realising sums owed.

The most important recent cases on this topic cases are:

Bresco v Lonsdale puts it beyond doubt that there is jurisdiction for an Insolvent Company to refer a dispute to Adjudication and the Supreme Court has sanctioned its use.

This is a Decision which we believe should be welcomed by Insolvency Professionals as a quick and convenient route to determine the value of claims and counterclaims in the liquidation of Construction Companies (notwithstanding that the Adjudicator's Award is only temporarily binding). There are, constraints on the Insolvent Company's right to enforce an Adjudicator's Award by Summary Judgment. This means that its use as a method of recovery remains up for debate.

The following cases indicate how this process should be utilised in a broader strategy to realise sums owed.

This case established that, where the Adjudicator determines the final net position between the Parties, exceptional circumstances might exist to allow the summary enforcement of that Decision. This can only be achieved if adequate security is given in respect of the decided amount and any potential Adverse Costs Orders (including a potential Enforcement Hearing and any action to challenge on  a final basis the issues in dispute).  This security might include the Liquidator undertaking to the Court to ring-fence the sum enforced so that it is not available for distribution for the relevant duration and a third party providing a Bond or Guarantee, or After the Event (ATE) Insurance.

This case is important as it establishes a viable route to securing payment or at least the temporary transfer of monies to the Liquidator creating leverage for him.

In this case it was held that, if there were three adjudications and each one produced a net result in favour of one or other of the Parties, then by netting those results off against each other one would arrive at a complete and comprehensive account of the Parties' mutual dealings.

The key question was whether to allow the Adjudications to proceed. The Judge's solution was, once the Adjudication Decisions had been given, to order an immediate stay on enforcement against Astec, provided that Balfour Beatty started litigation within six months. This was much simpler and easier than Astec attempting to secure the monies and paying them into Court. The Judge did not accept the suggestion that the correct course of action was Litigation immediately rather than Adjudication.

It was stated that Astec should be allowed to bring the Adjudications subject to certain conditions. Security for the costs was originally offered by Astec. The Judge noted that he had seen a letter from Insurers giving an indication that they would be prepared to increase the amount to the sum allegedly required (£750k). The Judge made an Order confirming this.

What does this all mean to an Insolvent Construction Company?

It is now clear, as decided by the Supreme Court, that an Insolvent Company can adjudicate on any dispute that exists.

The Court's will enforce the Decision (unless the Adjudicator's Decision is wrong in Law).

If the Insolvent Company (or actually the Insolvency Practitioner) commits to ring-fence the Adjudicator’s Award and provide security to adverse costs of action the Courts will either:

Enforce the Decision meaning payment must flow to the Insolvent Company (potentially temporarily); or

Allow a stay to enable a final reckoning but this must be resolved within a short time period (the Courts are suggesting six months).

To emphasise this point we would refer to a recent matter we have been involved in.

We recently acted for a Company defending three actions in Adjudication against an Insolvent Company (in Administration in this case). We managed to have one of the Adjudications withdrawn but two proceeded. The Adjudicators awarded a total of £500k against our Client.

In the past, our Client would have kept the money, resisted (successfully) enforcement of the Award and maintained a strong negotiating position as possession of the funds, associated with the Award, remained in its control. The Insolvent Company would need to start another action (Litigation ordinarily) to secure a Decision in the Courts which would have secured the payment permanently. This is usually cost prohibitive.

However, as the position was that the Court's would probably enforce the Decision and our Client would have to pay the Insolvent Company, subject to the Insolvency Practitioner committing to ring-fence the Award (£500k) and providing ATE Insurance for the adverse costs.

BUT, subject to the commitment to ring-fence and securing ATE Insurance the money would flow to the Insolvent Company and our Client would have had to start an action to overturn the Decision (and get its money back). This changes the respective positions in any negotiations with the balance now firmly in the favour of the Insolvent Company.

The Courts could refuse to enforce the Decision but insist that the matter is resolved (finally) quickly - six months has been suggested. This still puts pressure on the paying side.

We believe that, if the Insolvency Practitioner is able to commit to ring-fence monies and secure ATE Insurance, there is an extremely favourable negotiating position to be secured which could result in realising sums which in the past would have been difficult, if not impossible, to secure.

Ramskill Martin is able to provide a "one-stop shop" service. For an agreed percentage on realised sums Ramskill Martin is able to finalise all a Contractor's Accounts, resolve any disputes (if commercially viable) including via Adjudication if necessary, secure the ATE Insurance, provide legal representation and assist the Insolvency Practitioner in the final negotiation.

However, the aim is to create an environment to generate the leverage conducive to resolution of a Contactor’s Accounts effectively, efficiently and in a timeous manner.

We attach a flow diagram explaining how this process works and when leverage is generated to the Insolvency Practitioner's benefit.

Our website uses cookies, which help us to improve our site and enables us to deliver the best possible service and customer experience. By clicking accept you are agreeing to our cookie policy. Find out more.